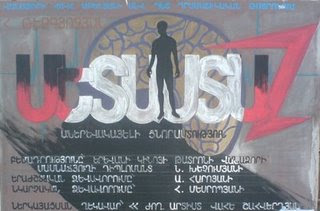 In the end of May the State Dramatic Theatre named after H. Abelyan of Vanadzor opened curtains for the premiere of the performance "MetastaZ (Metastasis)" under same play of Hovhannes Tekgyozyan "Metastasis". Premiere was really impressing from the both chosen subjects and the originality of the performance. The Theatre had never had such kind of performance in it yet, which was sort of experiment for the the theatre filled with glory and with scandal at the same time. From the very beginning it was planned as the audience would be a part of the play: there were 30 chairs black and white colored, like chessboard and they were on the stage. Director Nune Khechumyan said: "That has been done on purpose, because it is more difficult for the actor to play looking at the audience at the same time, which means the professionally of the actor should be very high. It is interesting also for the spectator, because there wasn't such kind of experience at the theater before. The spectator can do nothing rather to be a participant of all that". A plead of talented actors was evolved in the play, such as Temur Atchinyan, Alla Darbinyan, Edgar Qocharyan, Hamlet Gyulzadyan and also one of the founders of PINK Armenia. The casting has been done very carefully. Also Hovsep Mesropyan and Vahe Shahverdyan were in all that action. One can speak about the

performance continuously; improbable occurrence and disappearance of actors on the stage surprised the audience and etc. The most interesting fact is that a performance based on real facts of two homosexuals was played in the third city of Armenia and not Yerevan. The main goal of the director was not the elucidation of the theme of homosexuality and drugs in general, but the torture of the people, having a pain arisen by treachery. The same can overtake each of us like it happened to the heroes of performance "MetastaZ". Unequivocally, one of the central aims of performance is the orientation of heroes that has caused spasm for the majority of spectators. In fact the most part of the Armenian society, does not accept and does not wish to accept "sick people, who still can recover from". The most part of public has been shocked and admired from professional acting and director's work of performance, and some others experienced a shock, proceeding from basic reasons and traditional mentality: " How can it be possible, we are Armenians, not homos?" Everybody was waiting for similar comment, however they are not in forces to suspend the group of these professionals. The troupe is not going to be limited only by premiere and couple of performances. They are measured to organize tours in all over Armenia and also abroad. Additives to it, Yerevan, Tbilisi, Moscow and Saint-Petersburg already wish to watch "MetastaZ". Performance deserves all the praise and also can be a great competitor for the European chamber representations.

Selected video clips from the MetastaZ are now available here:

Many thanks to PINK Armenia for providing this material.